Not Your Typical European Vacation: How a Lanzarote Tour Transports You into Another World

When you think of European vacation, places like Paris, Italy, and Spain usually come to mind. The two words usually conjure images of the Eiffel Tower, Venice Grand Canal, or La Sagrada Familia, especially for typical tourists--those who go after the usual sights or the popular attractions.

When you think of European vacation, places like Paris, Italy, and Spain usually come to mind. The two words usually conjure images of the Eiffel Tower, Venice Grand Canal, or La Sagrada Familia, especially for typical tourists--those who go after the usual sights or the popular attractions.

However, there’s so much more to a Eurotrip than these usual destinations. In Spain, specifically, there’s the Canary Islands, which seamlessly combines all kinds of attractions you’d want to enjoy in a holiday. Tours of Lanzarote, in particular, will leave you feeling like you’re in another world with the island’s surreal, cinematic sights. Here, we got to enjoy endless breathtaking views—while we’re up in the mountains, exploring attractions on land, or hopping between islands.

Because we didn’t have the luxury of time to fully enjoy a Lanzarote island tour, we opted to go on a Lanzarote Grand Tour. Definitely one of the best tours in Lanzarote, it combines all the top attractions in the island—from the volcanoes, to the wine regions, to the exceptional architectural treasures by artist Cesar Manrique, and more. At the end of the tour, we were tired but overwhelmed—awestruck and stunned at how there’s so much to see and admire in the island. 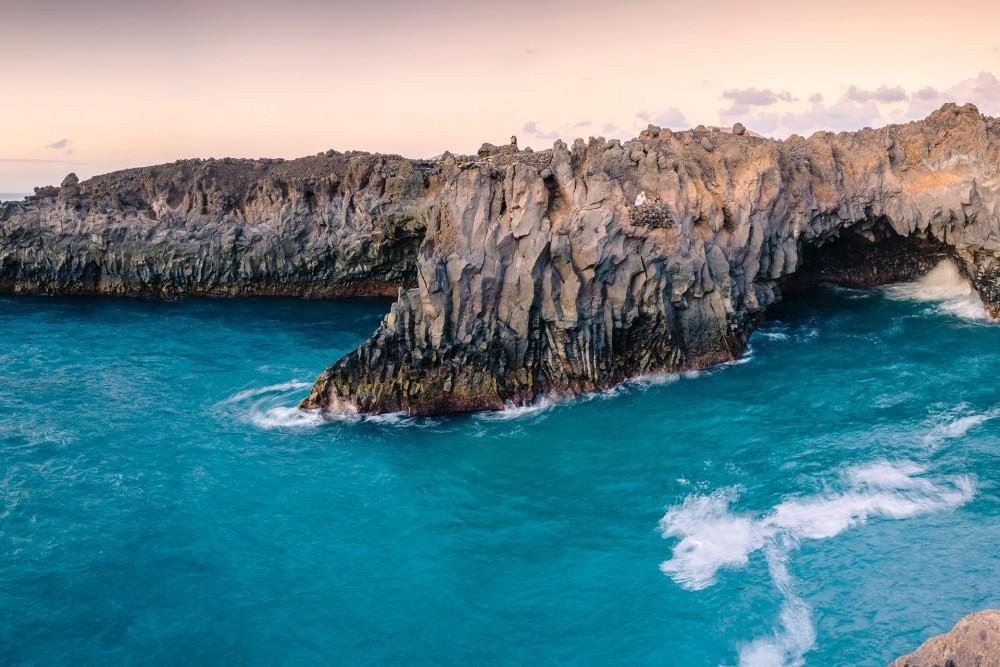 Our Lanzarote tour took us first to Los Hervideros, which I must say served as a teaser of the cinematic sights we were to enjoy in the rest of the excursion. Without seeing it, you’d think it’s just the usual beachscape, but the rugged volcanic coastline’s dramatic rock formations and caves is not something you’d typically see in any beach.

The intricate, bizarre-shaped cliffs set between the mountains on top and the rough waters below will definitely draw your attention. The waves crashing against it complete the astonishing, picturesque scenery. 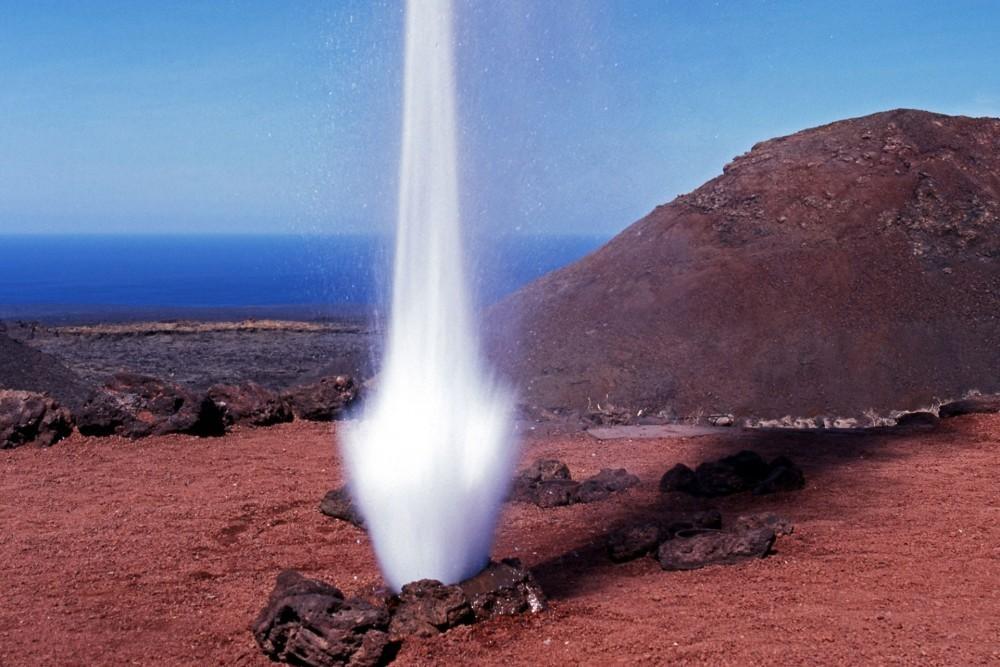 Most of Lanzarote excursions always include a stop at Timanfaya National Park, and you’ll find out why once you step foot on the island’s popular attraction. Probably one of the best Lanzarote experience tours one can enjoy, this is where we got to immerse ourselves in the unique volcanic landscape of the island which it’s famous for. 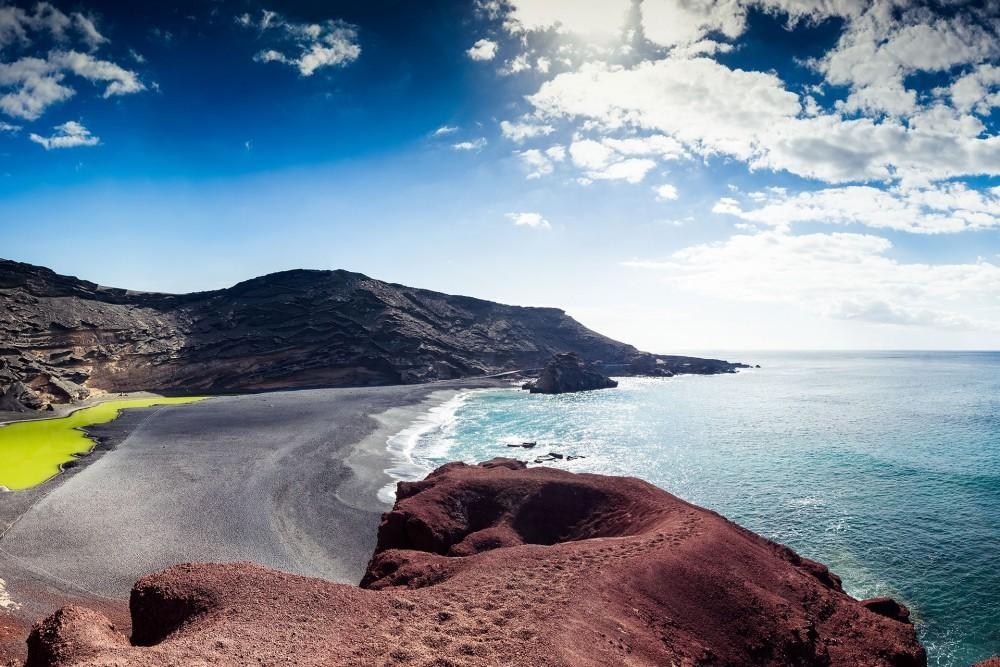 El Golfo, the emerald lake that’s considered a beautiful freak of nature brought about by the volcanic eruption, is a popular site for taking photos. Even from afar we could see the emerald water standing out against a backdrop of rugged rock formations and the sea that’s just a few feet away. We found out that standing on top of the volcanic landscape is the best way to capture the unique sight here, with El Golfo serving as our striking background.

The amazing discoveries in the park don’t end there though, as we also got to witness and experience geothermal experiments and demonstrations. We watched in awe as our Lanzarote guide threw hay and straw into a crater hole, which burst into flames due to intense heat. The sight of water boiling and shooting into the air after it was poured down into the holes was also one for the books—an amazing experience even non-science freaks would appreciate.

Of course, we didn’t pass up the chance to explore Timanfaya Park and experience the luna tour. At this point we were pretty much convinced that we’ve landed in a different planet, as the entire volcanic landscape is something you’d never imagine to belong in our world. The mountain slopes with their varying, breathtaking colors seem like a painting, creating surreal, spectacular scenery. 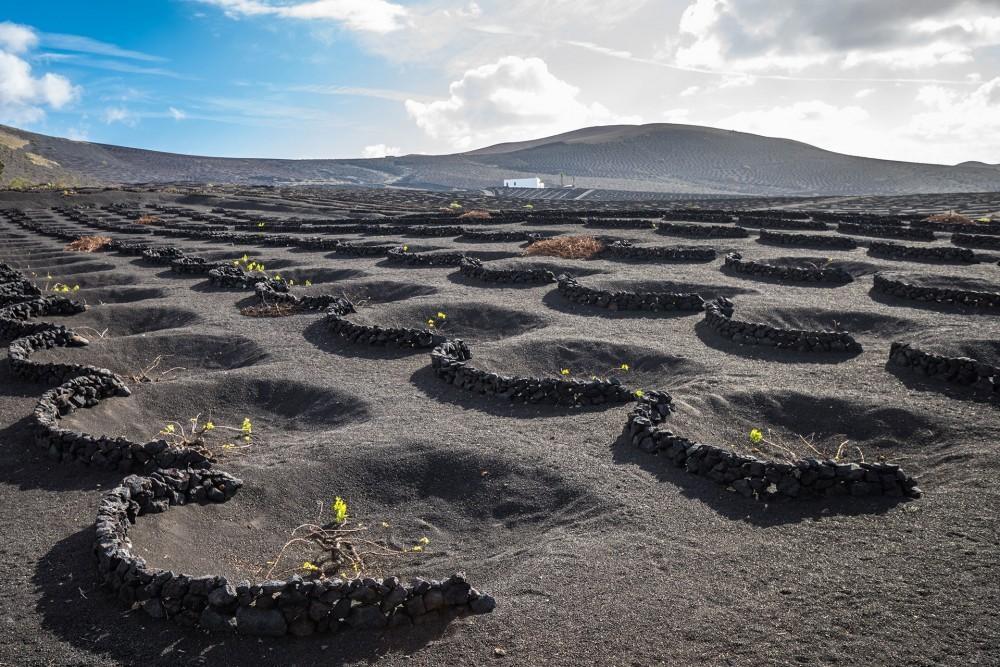 The rest of our tour of Lanzarote took us to a wine region, where we not only got to discover how the local wine is produced but also taste the fine wine.

We also got to visit to see the charming village of Haria, whose gorgeous landscape seemed like a postcard to me, with its whitewashed houses and numerous palm trees beautifully complemented by the mountains in the backdrop.

We ended the tour on a high note as we visited Jameos del Agua, which is one of the masterpieces of the late artist and architect Cesar Manrique. As if going with the whole otherworldly and cinematic theme of Lanzarote, Jameos del Agua looked like something out of a fantasy movie with its interior lagoon where tiny albino crabs live, its unique café housed inside a cave, and its swimming pool that’s solely meant for the King of Spain to swim in.

From our short stay on the island, we learned that booking Lanzarote excursions is the best way to explore all the best spots and make the most out of our limited time. Lanzarote guided tours, just like our Lanzarote Grand Tour, allowed us to not only see the popular sights but actually discover and learn more about the exceptional island, its fascinating history, and its wonderful people.

Get the latest deals

For the latest deals on the best things to do on your holiday sign up for our newsletter, don´t worry we hate getting junk mail too so we will only send you things that are relevant to your travels, can save you money and give you ideas on excursions in destinations all around the world.